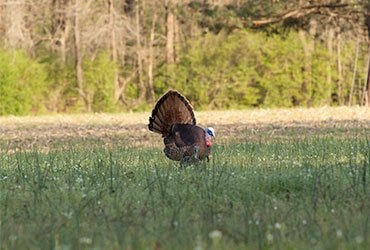 Knight & Hale Pro Staffer Jack Coad of Buffalo, N.Y., loves turkey hunting. His passion and knowledge has earned him a place as a highly requested speaker at NWTF events and store promotions. He says that realism is key to calling in spring gobblers, and that dealing with the hunting situation is the next step.

Even though spring turkey season is over for this year, you should take this time to perfect your call so you'll be prepared to rack up the birds next season. Making the right moves on a bird comes with experience, but it all begins with a realistic-sounding turkey call. And that takes practice.

Q: Jack, let's start at a basic level. What's the best way to learn to call on a diaphragm turkey call?

A: Practice until you can produce the sounds, then get a good sound track with live turkey calls such as Spittin' Feathers. I practice by listening to the CD, pausing it and mimicking what I just heard. I really pay attention to the cadence. I think it's the most important part of calling.

Q: How about perfecting your tone?

A: Learn to blow single notes – single high notes and single low notes. Learning to perfect each of these notes will enhance your completed calling sequence. I do a lot of practice when driving in my car – alone.

Q: What's the most important aspect of calling to a gobbler?

A: Learn to call quietly! Yelps and cutts that are quiet can absolutely drive a longbeard crazy. It is always easier to call with volume should the need arise.

Q: What advice would you give a caller who is already pretty good but would like to take it to the next level?

Q: If you only had one type of call, which would it be?

A: Three-reed calls allow the caller more versatility with his calling sequence. Adding more reeds to the call makes it difficult to get the true higher-pitched notes more common in younger birds. I like triple-reed calls that allow me to make higher-pitched sounds such as whistling and Kee Kees, especially after the first week of the season. All the other hunters out there are using raspy older sounds and that can make a younger bird more appealing to that longbeard. The flock has a certain pecking order and the later it is in the day or the season, the more success you will have with younger-bird sounds.

Q: Which calls do you have with you when you're hunting?

A: I like using a 4 to 4.5 reed with a double "V" call for hard cutting and dominant yelps while using the three-reed calls in the Turkey Tech Series. The Tech diaphragms with split "V" and half moon cuts make sounds that are a little higher pitched. These types of calls give me greater range, especially when changing a diaphragm call is not possible, like when you have worked that bird to within sight. Kee Kees and whistling calls are easier to make with single and double reeds, however, with the right material, cuts and number of reeds, I am able to reproduce a multitude of different calls with that one triple reed.