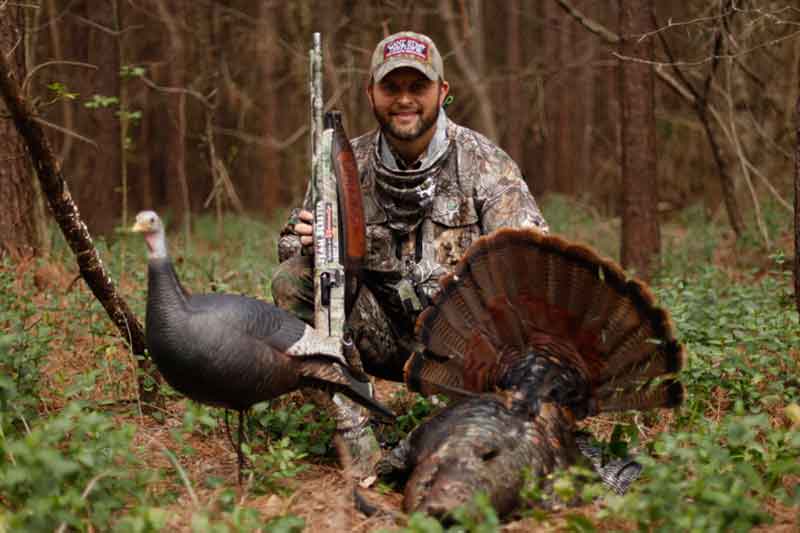 Dos and Don’ts of Fanning

Fanning turkeys, the exciting tactic of hiding behind a turkey fan or decoy while sneaking toward a gobbler in an effort to entice the bird to come charging toward you, has become especially popular in the past few years. But, the method is also controversial. Purists claim that the fanning gives hunters an unfair edge and that it’s unsafe. Others say it’s a ton of fun and a great way to hunt henned-up gobblers. I personally think it’s a ridiculously cool way to kill turkeys.

I like fanning because it’s different and exciting. When a gobbler sees the colors in those approaching tail feathers, he becomes convinced that another bird is moving in on his ladies, and he’s just not going to have it. He’ll usually come charging in, and the adrenaline you feel during that experience is unbelievable, not to mention, fanning is an extremely productive way of bagging a tom.

If you break it down into percentages, I’d say that you have an 80 to 90 percent chance, given the right situation, of experiencing success with that approach. But the purists do have a point, there are safety concerns that should be taken to heart.

The reality is, anytime you use decoys, you put yourself in danger, even if you’re just sitting behind them at 20 yards. The whole point of fanning is to trick a gobbler into believing that you are an aggressive tom coming to steal his women. If you do a good job of this, you may also convince a poacher or an errant hunter that you’re a bird as well. 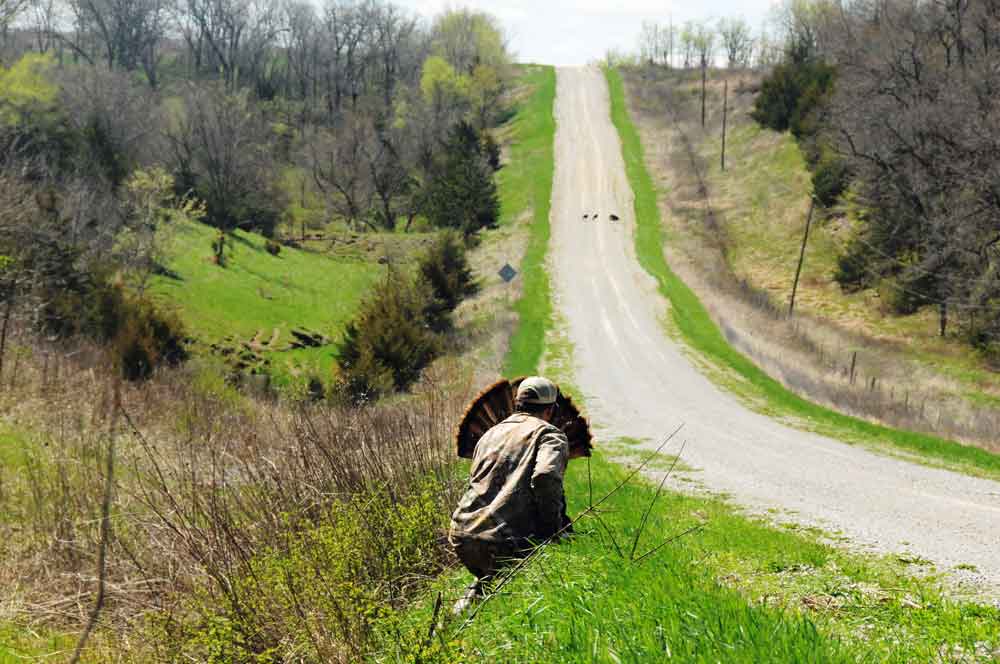 For that reason, you should only fan in open-field situations on private land.  Don’t fan on public land or even on leased land where you may encounter other hunters. Also, don’t fan in areas of thick brush or trees. You want to trick the gobblers, but you want to be obvious enough that other hunters will spot you before they take a shot toward the decoy.

When it comes to decoy selection, the brand or model is less important than convenience. Select a lightweight decoy or fan that you can easily maneuver and crawl with. You also want to be able to stick it in the ground when the moment of truth arrives.

When you’ve located gobblers that you want to fan, find a hill or some cover within 150 yards from the birds.  Once you’re ready, ease out and start crawling toward them with the decoy or fan in front of you. Stay hidden behind the decoy the best you can.

Typically, by the time you reach the 80 to 100 yard mark, the gobblers you’re after are going to break off from the hens and run toward you. You must be ready.

If you decide to fan turkeys, then you need to commit to the aggressive process.

You can’t move in a sluggish manner. You must get out there and get on them. Be aggressive. Some people stay back in the shadows, but I’ve found that if the gobblers you’re after are in a food plot or field, you need to get that decoy out into the sun, loud and  proud, so the gobblers will sit up and take notice. Some people will hold back in the shadows, and that doesn’t work. This is a bold tactic and you need to act boldly to pull it off.”

Sometimes, once I reach about 150 yards from the gobbler, I’ll hold the decoy out and beat the decoy on the gun as if it the turkey is dying and flopping or fighting.

The gobblers see that commotion and go crazy. Ninety percent of the time, the gobblers will come charging in. It gets you so pumped up that you feel as if you’re going to kill every turkey that lives.

But, just because they come storming in to you doesn’t mean that you’ll succeed. The challenge with fanning is getting off a good shot.

The birds come in so hard and so fast that if you’re not prepared, you’ll likely miss the shot. To get a good clean shot, you need to position your gun under the decoy and shoot the bird as it comes in. Once you see that death march, figure out a way to get your gun under or through that fan and get ready.