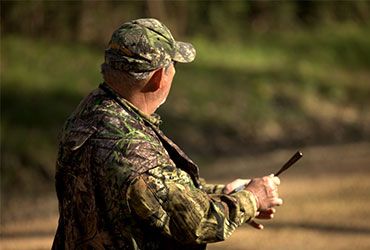 Without question, it can be extremely difficult to tangle with call-shy longbeards that refuse to cooperate and have bad attitudes. Outside factors such as lopsided hen-to-gobbler ratios, periods of intense hunting pressure, increased predator encounters and even the weather can cause gobblers to be tight-beaked or non-responsive.  When facing these tough hunting conditions, you need to switch gears and exploit call-shy longbeards with the following customized calling tactics and strategies that will get the job done.

When I first started turkey hunting many years ago, I accidentally stumbled across a calling strategy that most call-shy gobblers can’t resist. At the time, I was aggressively working a stubborn old longbeard that refused to gobble much or budge from his strut zone. He would strut, drum and gobble sporadically, but the hardheaded joker wouldn’t come any closer. Finally, I stopped calling and tried to sneak within gun range of the puffed-up strutter. Before I made it half-way to the gobbler’s strut zone, he had already reached my original calling position and busted me in the process.

After that embarrassing mishap, I learned to turn the table on call-shy gobblers with some hot to cold calling treatment. Basically, all you have to do is strategically hit longbeards with a series of aggressive cutts and yelps to get him fired-up. Next, completely stop calling and wait him out, but be alert and make sure your gun is in the ready position. In many cases, the tom will sneak in quietly or lightly drum as he approaches your setup.

Make no mistake; veteran longbeards that have been hammered by a lot of loud and aggressive calling can be ultra-sensitive and extra-hard to work. After opening weekend, a large percentage of gobblers have already been bumped, spooked and in some cases even shot at by other hunters. The last thing you want to do in this situation is overcall. In fact, assertive calling strategies will often make a call-shy gobbler actually turn and go away from you.

With this scenario, one of your best options is to simply rely on soft and subtle calling tactics. Soothing calling sequences that consists of muffled yelps, clucks and whispering purrs can really turn the table on a call-shy gobbler. The key is to appear uninterested in the longbeard and play a little game of hard-to-get. If you really want to add some realism to this particular calling strategy, then simply scratch and rustle the leaves with your hand as you softly cluck and purr. In most cases, this type of finesse calling will coax a call-shy gobbler right down your gun barrel.

Another lethal strategy for wary longbeards is to ease away from a gobbler and call, which simulates a hen that has lost interest and is leaving. For this tactic to work, you need to first make contact with the gobbler and then slowly drift away from his position while calling. After sneaking several yards back, setup and softly call again. This down and dirty tactic basically bruises a longbeard’s ego by making him think the hen is leaving him behind or seeking company elsewhere.

If at all possible, try the drift, fade and call technique with a hunting partner to increase your shot opportunities. The trick is to make sure the caller stays in direct line with the shooter when retreating back and calling. Drifting, fading and calling is definitely a high-impact turkey hunting strategy, especially for call-shy toms that like to hang-up just out of range. In most cases, the caller who is drifting away will pull the longbeard right into their hunting buddy’s lap.

Consequently, sometimes you have to think outside the box and exploit call-shy turkeys with a different approach. A killer calling tactic for bullheaded longbeards is to simply make contact with one type of call to get the bird gobbling and then abruptly switch gears by changing calls. For example, start your calling sequence with a clear-noted mouth call and switch over to a raspy sounding slate.  It’s amazing how a different sounding call will sometimes convince an obstinate tom to come on over and check things out.

Another sneaky trick you can use with this technique is to merely combine two different sounding calls to simulate multiple hens. Yelping with a mouth call while simultaneously purring and cutting with a slate or glass friction call is a great way to pull a big-bearded bruiser straight to your setup. Over the years, this high-impact combo-calling strategy has enabled me to tag a number of call-shy gobblers from heavily hunted areas.

Break Into His Comfort Zone

When conventional calling techniques and hunting tactics fail to get the job done, you have to push the envelope and attack call-shy longbeards with aggressive strategies. Utilizing the terrain and sneaking through the woods with precision and stealth is sometimes what it takes to make something happen. Moving in close and breaking into a gobbler’s comfort zone before calling is a risky tactic, but it will produce results during challenging spring hunting conditions.

The key is to use the terrain to hide your approach and rely on non-turkey shock calls to monitor the gobbler’s current position. For instance, a crow call will allow you to locate the longbeard without changing his course of direction. Setting up just ahead of a traveling gobbler and applying soft and subtle calling techniques will often make him strut and show himself. The trick is to move in dangerously close and setup in positions that make it super easy for the strutting gobbler to approach and be seen.