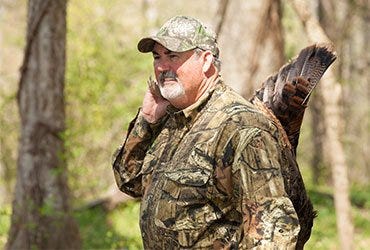 Let’s see what call some of today’s top turkey hunters would choose, if they could only pack one into the woods with them this spring.

Just about every hardcore gobbling addict carries a complete arsenal of turkey calls with them into the field during the spring. Their vests are usually weighted down with a variety of friction and mouth diaphragm calls that produce a wide range of tones, cadences and vocalizations. However, if some of today’s top turkey hunters were told that they could only pack a single call into the woods this spring, which one would they choose and why? Pay close attention, because the pro’s are about to reveal their No. 1 go to calls that they rely on to consistently slam longbeards into the dirt season after season.

Hunting legend and outdoor icon Harold Knight can make just about any type of turkey call sound better than the real thing! As the co-founder of Knight & Hale Game Calls, Harold has spent most of his life perfecting the art of calling critters like stubborn gobblers into close range. In doing so, he has designed some of the best sounding turkey calls that have ever hit the market. This turkey tagging machine still carries a variety of different calls into the field, but a mouth diaphragm call known as the Magic Moon Cutter is by far his favorite calling weapon.

“I like to use a number of different turkey calls in the field, but my go-to or confidence call would have to be the Magic Moon Cutter. This custom cut mouth diaphragm call is extremely versatile and allows me to produce natural sounding vocalizations without having to move my hands. I can basically tell that ole gobbler exactly what he needs to hear! With a little practice, a hunter can produce high or low tones with ease, and the call has an authentic sounding break over. Plus, you can cutt, yelp, cluck and purr at any desired volume the situation demands. I can go from soft and subtle calling to loud and aggressive with no problems whatsoever.”

As co-host of the popular television hunting show “The Hit List,” Chad Ritter spends a great deal of time in the woods chasing fired-up gobblers and massive-racked whitetails. Like many serious turkey hunters, Chad also relies on multiple types of calls during the spring season. However, the new Scarlet Fever Friction Call from Knight & Hale is definitely the one he’ll be reaching for first this April. For good reason, Chad strongly feels the Scarlet Fever is the most authentic sounding and easiest to use call that he has ever worked.

“It didn’t take me very long to absolutely fall in love with the Scarlet Fever friction call from Knight & Hale. The call is CNC machined and set with a slate sound board that is topped with a crystal surface. When matched with the custom two-piece striker, you’ve got a deadly combination that gobblers just can’t resist. With some work, just about anyone can pick up this call and bring a lovesick longbeard in on a string. It also gives me a great deal of confidence knowing that the Scarlet Fever was the call used to win the World Two-Man Team Calling Championship. On the competition stage or in the spring woods, this is beyond a doubt one tough call to beat.”

When professional bass angler Andy Morgan is not on the water dominating the tournament trail, you’re likely to find him somewhere deep in the woods hunting fall whitetails or spring turkeys. As co-host of the “Hit List,” Andy jumps at any chance to tangle with swelled-up longbeards that like to gobble and put on a show. Like Harold Knight and Chad Ritter, Andy also has a turkey vest crammed full of strikers, friction calls and mouth diaphragms. Every call he uses sounds good and will kill turkeys, but the Cranky Hen is the one he typically grabs first during the spring season.

“Once I heard Harold Knight and world champion caller Chris Parrish running the Cranky Hen mouth diaphragm call, I was instantly sold and anxious to get my hands on some. It’s a competition grade call with a modified bat wing cut that is smooth and easy to operate. You don’t have to be a top-notch competition caller to make the Cranky Hen sound like the real deal. The reeds are strategically set back in the frame, which enables the caller to generate natural sounds with maximum control and calling precision. I generally do a lot of turkey hunting alone and the hands-free operation minimizes my movement, which decreases the chances of a keen-eyed gobbler busting me and spoiling my hunt.”

With turkey season just around the corner, you better be practicing your calling and getting your gear ready. Right now is also a great time to check out some of the pro’s No. 1 call choices and try them out yourself before opening day. Remember, if you really want to your calling to sound more like the pros, then it only makes sense to use the same calls they rely on to get the job done season after season. At the end of the day, adding realism and improving your individual calling skills will dramatically increase your chances of tagging out this spring.