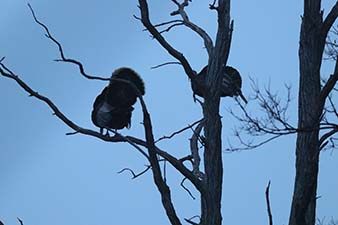 If you’ve hunted turkeys long, you know locating the birds on the roost gives you an advantage. After all, locating the gobbler is half the battle. Although, roosting a gobbler does not ensure you’ll kill him, it does give you a great location to start from. For that reason, I always roost the birds the night before my hunt when possible.

One of the best ways to locate a gobbler’s roost is to consider the terrain you’re hunting. Turkeys love to roost on edges, and by edges, I mean edges of bluffs, creek banks, fields, mountains, etc. That way, if a predator approaches from behind or at a higher elevation, the turkeys can pitch off and sail to safety.

So, if you’ve never hunted an area, I recommend getting aerial photos and a topo map. The topo map will help you figure out the terrain and distance between features, while the aerial photos will show you how the creeks, edges and fields lay. So, if I’m hunting a 500-acre farm I’ve never hunted before, I’ll be able to look at the map and photos and figure out where the turkeys will most likely roost.

When roosting birds, I like to get out there a couple of hours before dark the day before I plan to hunt. That allows me to slip in close to where I think they may roost. If I know the birds are in the general area, but can’t seem to locate them, I will use an owl hoot or call just a bit. If I’m close enough, I may be able to watch the turkeys fly up and get an exact pinpoint of where they’ll be in the morning.

Setting Up for the Hunt

The next morning, I try to set up within 60 or 70 yards of the roost, and I get there while it is still very dark. I don’t want the birds to have any idea that I’m there, so I don’t use a flashlight to walk in.

When it comes to setting up, knowing the terrain pays off. You need to figure out where the turkeys are likely to go once they leave the roost. If I believe the turkeys are going to pitch down in a field, I may set up with my back to them. But, if I’m hunting in the woods, I’m going to set up where the birds fly down right in front of me. 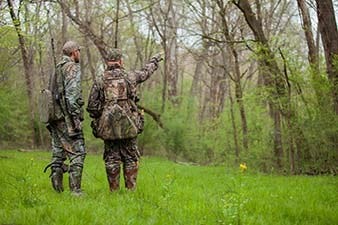 One of the biggest mistakes people make is not having a game plan once they’ve roosted a gobbler. Some folks will just show up in the general area the next day and set up wherever.  You really need to plan and think it through.  If you don’t set up close enough or in the right location, a hen or group of hens can get between you and the gobbler and lead him away.

I’ve learned while observing gobblers that they will generally return the way they came. So if I’m lucky enough to see from which direction a gobbler came before roosting, then I’ll set up so he’ll pass me on his way back. That doesn’t always work, but eight or nine times out of ten it does.

Another big mistake is calling too much while the gobbler is still close to or on the roost. A three- or four-year-old gobbler is used to the hens coming to him. He’ll strut on the limb and gobble to get their location.  So, I rarely call while the bird is on the roost. Or I may cluck once or twice, but that’s it.

My hope is that he’ll pitch down within gun range. That’s the ideal scenario, but of course, we’re talking about turkey hunting, so anything happen.

Posted in KnH News By @Knightandhale