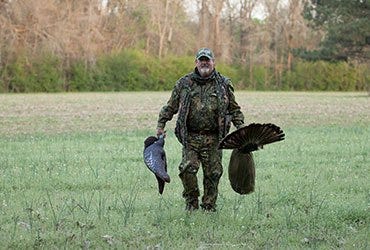 It’s amazing that a bird with a brain the size of a green pea can frustrate so many hunters, but they do it for a livin’. Here are three tricks to think about the next time a gobbler gives you the slip.

Most knowledgeable turkey hunters say that overcalling is the biggest mistake a hunter can make, but there are times when sounding like an all-out party is the way to go. Take this example: A hunter working a relatively small parcel of land in the rolling hills of northwest Arkansas watched a mature gobbler strut in the open on a hillside across a deep ravine 800 yards away. Of course this bird was not on the land he had permission to hunt. Our hunter got out a loud box call and sent some yelps in the direction of the gobbler, and when he did the gobbler’s head dipped in a gobble response. Each time the hunter called the big tom gobbled back. After several hours of sparse calling, the hunter gave up and headed on to greener pastures. He talked to friend that night and the buddy asked if he could work that bird the next day. Again, the bird was in its strut zone and gobbling its head off, and our new hunter took a different approach. He cranked on a box call and worked a diaphragm at the same time, calling nearly constantly for 20 minutes, throwing out loud yelps, excited cutts and kee kees, and the gobbler finally had had enough. It jumped up and flew across the ravine, plopping down 30 yards in front of the new hunter. Another example. This writer once had the rare opportunity to hunt with not one, but two NWTF Grand National Champion hunters, Chris Parrish and Steve Stoltz. We worked in close to a gobbler while it was still dark and got into position. The pair quietly produced just enough tree calls to let the gobbler know some hens were nearby, then shut up. But this gobbler wasn’t going to be a pushover. The sun cracked the horizon, then fully rose, but in the tree the old gobbler remained. He gobbled and gobbled as Stoltz and Parrish worked him, but he wouldn’t budge. This bird was waiting for the hens to come to him. The pair of calling champions sounded better than most hens, but the gobbler stayed until we heard a real hen approach. Parrish and Stoltz yelped, cutt and purred, produced the best sounding fighting purr ever seen in the woods, slapped their hats on their thighs to sound like wings and pulled out every trick in the book, and the gobbler disappeared over the next ridge on the tail of the hen. We didn’t get that bird, but I learned that sometimes no matter what you do, it’s just not that bird’s day to die. So take heart. If two of the best callers and hunters in the world can’t get a gobbler to work, you need not be ashamed of an empty game pouch.

Now this is my style of hunting! A gobbler’s typical day starts at dawn (give or take an hour) by trailing some hens and maybe getting to breed. By 10 a.m. or so, though, the hens slip away to their nests and the gobbler’s all alone. Suddenly all the babes are gone, and all he can do is head to an area where he can be seen, or at least heard, and do some strutting and gobble a little and hope there are still some hotties in need of his masculine attention. This is why sleeping in and heading to the woods during midmorning can be a good tactic. If you know where a bird is roosted, give him a shot first thing, but if it doesn’t work out go get some biscuits and gravy and come back after a while. It’s best if you’ve done your homework and know of several likely strut zones. Move in and give them a shot, and you should know right away whether the gobbler is home. Midmorning also is a good time to run and gun, walking a path or two-track road and calling occasionally. Be ready to dive into position.

You’ve seen a big, mature gobbler at the back corner of an open pasture at 10:30 a.m. three days straight, but when you slip in close and call he goes the other way. Here are two options. Slip into this area and silently wait him out. Leave your calls at home if you don’t trust yourself not to use them. Position yourself within easy range of where you’ve seen him and hunt him like you would a mature buck. It ain’t exciting, but it’s effective. It’s also important to get there early. The second option can be more exciting but still require you get there early and wait. Place a mature strutting gobbler decoy in the field near where you’ve seen the bird and call with deeper, coarse gobbler yelps a few times. You even can throw out a gobble or two if you’re capable. (Never use mature gobbler decoys on public land!) Chances are the gobbler won’t show up until the hens leave him regardless of how you call. This is a good time to use a blind because almost everyone loses focus after an hour of two, and the blind will conceal those fidgets that always come on just as the bird approaches through the woods. Several things can occur when using this trick; the gobbler will see the decoy and come in fast intent on running off this intruder, the gobbler will hang up and eye the decoy warily and may come in or may not, or the gobbler will turn tail and run. The opportunity to see that big bird sprinting toward the decoy is worth giving this option a chance.