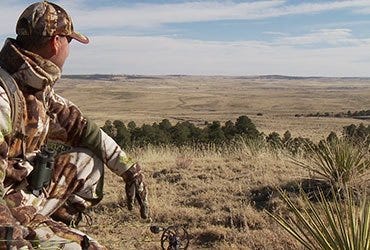 Preparing for the backcountry can be a daunting task. If you live out West and are used to the thin air, steep mountains and miles of untouched wilderness, being prepared for the backcountry is easier for you than it is for eastern hunters who are heading West for the first time for an elk hunting trip.In both situations, hunting off the beaten path can test a person's physical strength, mental toughness and drive to succeed at filling their tag. Over the years, I have watched plenty of hunters get excited about hunting at the tree line, only to watch their enthusiasm fade on day two or three of the hunt after they've only had a few encounters with game, are running low on food and running out of strength. The backcountry is a tough place to hunt, no matter how strong you are.

There are several things that will help diehard bowhunters survive for a week or two of tough backcountry hunting. First, purchase only top notch hunting gear. One of the most important pieces of equipment needed on a backcountry hunt is a high quality backpack. Jay Robert from Idaho is an expert on backpacks. Robert is an archery shop owner who has been one of Hoyt's and Mathews top dealers for years. In addition to owning a pro shop, Robert co-owns Blacks Creek Guide Gear, a company that specializes in building backpacks designed for the serious backcountry hunter. "Having a backpack that fits comfortably and doesn't cause back or leg pain is critical when hiking in the high country," Robert noted. Many hunters don't know the difference between a good pack and a mediocre one. "A hunter who is serious about having a great pack must try a few one before purchasing one. Hunters should go to a local retailer and put a pack on. Their decision should be based on how it fits and feels," Robert advised. Robert said there are a few features to look for in a backpack. "A good backpack should have an adjustable torso length. Without it, a backpack won't fit a hunter properly. I think that the waist belt and shoulder straps should come with EVA foam. EVA foam is comfortable and makes walking several miles a day much easier. I prefer a mesh back that makes the backpack less hot when you're hiking a lot," Robert added. He also prefers a waterproof pack made of a quiet material, especially for bowhunters. Another important feature is a bow holder.When hiking, having the bow strapped to the hunter's back keeps his hands free for holding other things like a walking stick or other gadget. It also keeps his hands free in case he falls. Most quality packs also come with some type of water bladder system.

Preparing for the backcountry can be a daunting task. If you live out West and are used to the thin air, steep mountains and miles of untouched wilderness, being prepared for the backcountry is easier for you than it is for eastern hunters who are heading West for the first time for an elk hunting trip. In both situations, hunting off the beaten path can test a person's physical strength, mental toughness and drive to succeed at filling their tag. Over the years, I have watched plenty of hunters get excited about hunting at the tree line, only to watch their enthusiasm fade on day two or three of the hunt after they've only had a few encounters with game, are running low on food and running out of strength. The backcountry is a tough place to hunt, no matter how strong you are.

Another must-have item for mountain hunting is a pair of good boots. Most hunters typically skimp when purchasing boots. Good boots keep hunters going. I have worn $100 boots and boots that cost more than $200. There is a huge difference between the two! Inexpensive boots often don't last as long and I always seem to get blisters when wearing cheap boots. A little mole skin and a good pair of boots prevent me from getting blisters. Make sure your boots are broken in before going on a hunt so that blisters and hotspots won't develop. Nothing can turn a 7-day hunt into a 3-day hunt like a big blister.

Cameron Hanes knows about surviving and thriving in the backcountry. Hanes says a big part of thriving in the backcountry depends on mental attitude. "Bad weather and other factors can turn a good hunt into a bad one. After a few bad days of bad luck, it doesn't take long before a hunter is ready to throw in the towel. Bowhunters need to remember that a bad hunt can turn into a great hunt almost instantly. After a few days of backcountry hunting, it is sometimes easier to call it quits when their body is worn out and their mental game is gone, but over the years I have killed my fair share of animals toward the end of a week long hunt. Sometimes it takes several days to figure out where the animals are, especially when hunting in the backcountry where there are millions of acres of wide open spaces for elk and mule deer to hide. On many hunts, I went home early because things weren't going my way or because I was worn out and I wouldn't have filled my tag. When I stay mentally tough and hunt hard until the end, I often fill my tag," Hanes explained.

Hanes recommends that hunters follow these steps to decrease physical fatigue and remain mentally tough. Hunters should not pack more weight than they know they can carry for several miles a day. "I try not to go into the woods with more than forty or fifty pounds on my back. Many hunters try to bring too much stuff into the backcountry with them. The heavy load eventually tires them out and causes sore muscles and they are soon ready to go home," Hanes explained. Hanes says it is important to bring good food and high quality hunting gear, but not too much of either. To keep his load light, he brings a bivy sack on most hunts rather than a tent. He brings a lightweight sleeping bag that weighs about 2 pounds. He eats foods high in calories to keep himself going. "I love my peanut butter and bacon sandwiches and freeze-dried food. It is important to take in lots of calories so you don't become weak and start losing weight. When you get physically weak, you often become mentally weak," Hanes added.

In addition to his staple peanut butter and bacon sandwiches, Hanes regularly enjoys nutrition bars made by Wilderness Athlete. They are lightweight and full of protein. Hunters may also want to consider bringing iodine tablets for purifying drinking water. "Iodine tablets are easy to use and are lightweight," Hanes noted. Some hunters can't get going without their 4-star breakfast including a couple slices of toast, bacon, eggs and a few cups of coffee. If you fall into that category, you better bring a horse! All hunting gear and food must be lightweight enough to fit into a pack. "Over the years, I have been able to whittle my load to around forty pounds. I have learned exactly what I can bring and what I can't," Hanes said. One way to determine what you can and cannot bring is to weigh it. Weighing everything before it goes into your pack makes cutting back easier. Once you realize that your favorite pillow weighs five pounds, making the decision to leave it at home will be easy.

One of the biggest problems eastern hunters encounter is dealing with the thin air found at high altitudes. Thin air can cause breathing problems and wear out even the toughest hunter. One way to limit the effects of altitude sickness is to get into the best shape you can before a hunt. Putting forty pounds in your pack, hiking regularly and running up and down hills for short distances will increase strength and cardiovascular fitness. Another option is taking a pill that will help you deal with altitude sickness. Wilderness Athlete makes a pill called Altitude Advantage that is designed to help hunters breathe better while hunting at high elevations. Allowing yourself to acclimate to high altitudes and limiting caffeine intake can also help hunters deal with the thin air effect.

Robert and Hanes believe that in order to be successful in the backcountry, hunters need to purchase the right hunting gear and have the right mindset. When hunters are lacking in either, they will probably go home empty-handed. "I think a lot of whitetail hunters come out West and find themselves in this big country and don't know where to start looking for elk or mule deer. In the east, hunters are mainly hunting on small tracts of land where deer can be found everywhere. Out here it is different and hunters need to be prepared for it. Having the right hunting gear, the right food and the right mindset can make a big difference when hunting in the West," Hanes explained.

Surviving and thriving in the West requires preparation more than anything else. Most diehard hunters who hunt out West prepare for next year's hunt the moment this year's hunt ends. They lift weights, hike, research and purchase new hunting gear, locate new hunting areas and buy new topographical maps. The hunters who sleep and breathe backcountry hunting and constantly prepare themselves physically and mentally for the next big hunt are the ones who are usually grinning and gripping big antlers at the end of a long hunt. Sure, they experience a little physical pain. Sure, there are days when they want to go home and cuddle with their wives and kiss their kids on the cheek, but at the end of the day they know that the pain and sacrifice usually translates into a filled tag. The moment the tag is filled, all of the preparation and hard work suddenly seems worth the effort and sacrifice.

Do you want to thrive and survive in the backcountry? Get the right gear and get yourself in the right mindset. The West isn't for Sissys.