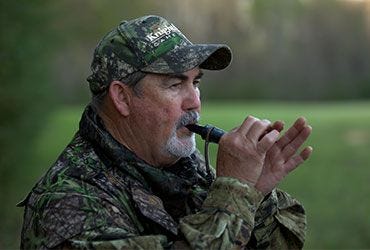 Without question, a shock call can be one of the most valuable tools that you carry into the spring woods this season. For good reason, shock calls enable you to effectively locate and monitor the current movement or directional travel path of gobblers. These calls have excellent volume, which means you can make contact from extended distances and during windy conditions that often impair a longbeard’s ability to hear a traditional-style hen call. Plus, shock calls allow you to pinpoint a gobbler without actually persuading him to approach your calling position.

As a result, this gives you a major advantage, because you can identify a gobbler’s exact location and strategically choose a productive setup. Hunters that rely on a hen call to locate a longbeard instead of a shock call have a much better chance of getting busted. Gobblers that are close by can pop up and be right on top of you before you even have time to setup, which is why a shock call is a much better choice. With that being said, let’s break down a variety of shock calls and discuss some high-impact calling strategies that will take your turkey hunting to a whole new level this spring!

Every turkey hunter should carry a good sounding crow call with them throughout the entire season. The hackling sounds of an irritated crow can make longbeards gobble when many other call-types go ignored. Crows inhabit almost every known hunting location and our active from daylight until nightfall, which makes this shock call productive throughout the entire day. Furthermore, crows often call out when they see turkeys or even turkey decoys on the ground. This is probably why a lot of longbeards respond to crow calling with a gobble, because it let’s potential hens know where he is located.
Shock Calling Strategy

When a lovesick gobbler is fired-up, one or two Hawwk sounds from your crow call will trigger a response. This is good for you, because continuing to work the call in repetition can prevent you from hearing the longbeard gobble. On other days, you really need to put some emotion in your calling and try to emulate the sounds of a ticked off crow that has just spotted a turkey. Aggressive and emotional calling also works better when gobblers are call-shy and have heard a lot of shock calls over the course of the season.

A little bit of hooting or barred owl laughing before daylight and right at dark can make a tight-beaked gobbler lose his mind. The owl call is undoubtedly one of the best locators to use when longbeards are on the roost. However, it will often work during the mid-morning and early evening hours as well. During the spring of the year, it’s actually not uncommon for owls to sound-off at noon and sporadically carry on conversations throughout the entire day.

In  most cases, a textbook who cooks for you owl calling sequence will get the job done. On other days, you may have to follow the short series with a who cooks for you all and stretch out the last note. If it appears the turkeys have a headache from hearing all the hunter-initiated shock calling, then you may want to step things up and put some emotion into your owl calling. Getting louder or even throwing some high-pitched barred owl laughs into the mix can be all it takes to force a stubborn gobbler to respond.

The echoing tone of a Pileated woodpecker or whistling screech of a soaring red-tail hawk are definitely capable of generating some shock gobbles on a slow day. The high-pitched tone has the ability to cut right through the wind and reach long-distance gobblers with ease. Both of these vocalizations are also less frequently heard in the wild and not used as much by hunters, which are two more solid reasons why you should throw one of each in your turkey vest this spring.

By the mid to late segments of the spring turkey season, a lot of your vocal two-year old gobblers have already bit the dust or been bumped by hunters on several occasions. As a result, you’re now engaging veteran longbeards that are master escape artists and paranoid two-year olds that are extremely call-shy. At this point, Pileated woodpecker and Hawk calls will often outperform crow and owl calls. The key is to start your calling sequence low and gradually work toward a louder cadence. You may also want jump way outside the box and utilize a goose call or coyote howler. Switching gears and breaking away from the pack by trying a variety of lesser used shock calls is a great way to elicit a gobble during tough hunting conditions. You never know what turkeys are going to respond to so come at them from all directions with the Team Pinpoint Locator Call Kit.