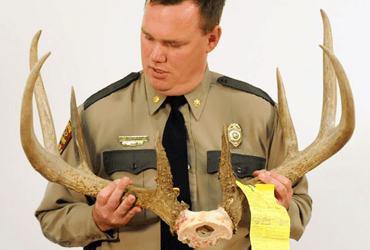 The world-record rack from an 8-point Minnesota whitetail killed by a poacher in 2009 has attracted many gawkers since the Department of Natural Resources started displaying it at special events around the state.

The typical 8-point buck with antlers larger than any other 8-point on record for North America was killed in Goodhue County, Minnesota during the fall of 2009. The buck's rack grosses 190 5/8 and nets 185. The buck was aged at 7 1/2. The alleged poacher and a neighbor both missed shots at this buck in 2006 and had been hunting it ever since.

Unfortunately, an alleged poacher got the buck before those who were hunting it legally.

The antlers are so valuable, the estimated value in the tens of thousands of dollars, the DNR made seven replicas last year to show off to the public.

But now people can view the actual antlers anytime they want – at DNR headquarters in St. Paul, MN.

"They have been displayed at the State Fair, Game Fair, the Deer Classic and at Turn in Poacher (TIP) and Deer Hunters Association banquets,'' said Rod Smith, DNR assistant enforcement director. "We wanted a place where people could see them any time of the year.''