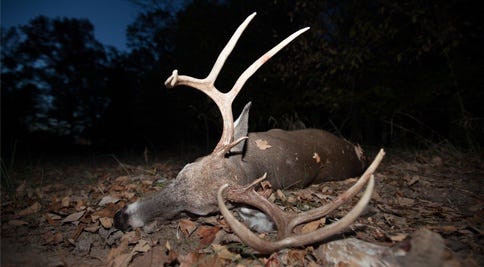 Make no mistake; your deer calls can ultimately be the difference between punching a big buck tag or going home empty handed. Calls are essentially opportunity makers and shot generators, which is exactly why you should never hit the woods without them. This is especially true throughout the magical and action-packed month of October. With that being said, let’s breakdown some deadly custom-matched calling strategies that will help you close the deal on a true wall-hanger right now.

In most hunting regions, the middle of October is when hunters will start seeing some major changes in mature buck behavior, patterns and daily activity.  Factors such as increased hunting pressure, cooler temperatures, shortening days and alternating food sources are responsible for these activity and pattern shifts. Bucks will begin rubbing, scraping and sparring more in preparation for the upcoming rut. The right call and calling strategies can be all it takes to bring a heavy-racked bruiser into a cleared shooting lane.

Utilizing a combination of grunting and short bursts of light rattling to simulate the sounds of two bucks sparring is a deadly calling tactic. For this calling sequence, a natural sounding grunt tube and rattling call are exactly what you need to make it work. Bucks are starting to act more aggressive and territorial, which is why this calling technique is so effective. When targeting mature, dominant whitetails, the DA’ Bone grunt call and DA’ Bonehead rattling system are the right tools for the job. In most hunting situations, The EZ grunter and Pack Rack are also a tried and true Knight & Hale favorite.

When used in combination, these two calls sound like the real deal and are capable of pulling a mature buck straight in on a string. The DA’Bone grunt call has excellent volume and a true-buck sound that can’t be touched by the competition. Plus, the DA’Bonehead rattling system is ultra-light, super compact and can naturally reproduce light sparring matches or intense fighting battles with ease.

The best times to call are during "lull" activity periods when the action is slow. Any dominant bucks that are nearby and hearing the calling will often come in closer to investigate. Another primetime calling situation is when you see a potential shooter that’s just out-of-range or traveling away from your setup. With both of these common scenarios, you are not likely to get a shot unless you do something to flip the script and turn the tide.

By the end of the month, mature bucks are getting fired-up, swelled-up and ready to rock. Scraping and rubbing activity intensifies and sparring matches are turning into serious territorial brawls. Dominant bucks are dealing with raging hormones and increased testosterone levels, which brings out their darker and more violent nature. As a result, this is one of the best times of the entire season to apply aggressive calling strategies that are specifically designed to provoke agitation and promote confrontation among dominant bucks.

Calling tactics that include deep-toned grunts with a lot of bass, intense rattling sequences and assertive snort-wheeze vocalizations can be lethal. With this hunting scenario, my go to calls are the Knight & Hale Death Chamber and DA’Bonehead rattling system. The Death Chamber gives you the ability to reproduce thunderous grunts and challenging snort-wheezes without switching calls. Hitting bucks with an aggressive series of two to three grunts and a snort-wheeze followed by a hardcore rattling sequence can really crank-up the heat in a hurry!

It’s important to remember that these calling sequences need to be bolder, loud and assertive than the calling strategies used earlier in the month. Under the right conditions, it’s not a bad idea to call periodically off and on throughout your hunt and especially during inactive periods. As mentioned earlier, you should also call to bucks that are traveling away from you in the opposite direction or too far away to shoot.

In addition, try to avoid calling to a buck that has pinpointed your exact location and staring directly at you. It’s much better to call to a buck when his head is down or focus is elsewhere. Also, make sure you utilize the tree your stand is attached to and surrounding cover to shield your movement and calling position. Turning your back and facing the tree is a great way to conceal your hand motions when running a rattle-style call like the K&H Pack Rack. This call is very compact and doesn’t require much movement to operate or achieve good volume. If you turn to your side or face the tree directly, you can hit bucks with a series of intense rattling sequences that bucks can hear, but not see.

Without question, learning how to custom-match your calling strategies and tactics to current buck activity and behavior can dramatically increase your shot opportunities this October. Utilizing the right call at the right time is sometimes all it takes to coax a giant right into your lap. Hit the woods hard with these high-impact calling tactics and make something happen this season. Good Luck & Good Hunting!