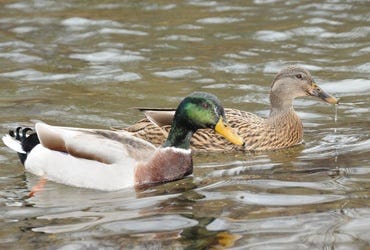 If there were major road systems marked in the skies for waterfowl, then flyways would be those routes.  Used by migratory birds as a result of evolutionary history and genetic programming, and layered with some learned experiences, these routes vary from the simple and uncomplicated to the extremely complex.  No two bird species follow the exact same path from beginning to end.  And flyways can be greatly affected from year to year by weather conditions, predators, hunting pressure and available food and water sources.  Too, the waterfowl populations that use these preferred migratory routes differ greatly in their numbers, travel speeds, travel distances, breeding ground origins and final destination points.

According to Scott Yaich, chief scientist with Ducks Unlimited, the world’s leader in wetlands and waterfowl conservation, migration flyways are important from a biological standpoint because they supply the needs of traveling birds.  Typically, a preferred route will provide food sources, water sources and resting places and will also avoid major geographic barriers – such as wide-ranging deserts or steep mountains – that can impede long flights.  But these migratory routes are also important from a regulatory standpoint.

“Flyway management systems, working together with the U.S. Fish and Wildlife Service, have really been a boon to waterfowl management,” Yaich says.  “The flyways are certainly being utilized by many species of waterfowl, but birds know no boundaries.  So these systems are really vital because they’re cooperative partnerships that help state and federal governments collaborate to manage resources that are shared among all the states… and among all the people who live in the flyways.”

North American waterfowl that migrate to warmer winter locations generally follow a north-to-south course along the flyways.  And while the flyway boundaries often merge, mingle, cross, and overlap, there are four primary routes: The Atlantic, The Mississippi, The Central and The Pacific.

Spanning more than 3,000 miles, The Atlantic Flyway stretches from the Arctic Circle and seven Canadian provinces and territories, down the Atlantic coast, through Maine, Massachusetts, Vermont, Maryland, Connecticut, New York, New Jersey, New Hampshire, Delaware, Rhode Island, Pennsylvania, West Virginia, Virginia, North Carolina, South Carolina, Georgia and Florida, and into the Caribbean.  Yaich explains, “This easternmost flyway embraces several primary migration routes and is of great importance to migratory waterfowl and other birds.”  However, this flyway also happens to be home to one-third of our nation's population.  Dense populations such as this have created many challenges for the birds and for the habitat in this area.  Nevertheless, figures for 2013 (rounded to the nearest thousand) show the number of active waterfowl hunters at 225,000, with the total duck harvest at 1,624,000, and the total geese harvest at 718,000.

Composed of three Canadian provinces and fourteen states, The Mississippi Flyway is a migration route that follows the Mackenzie River in Canada to the Mississippi River in the United States, from Canada's boreal forests to the Gulf of Mexico.  It’s composed of Michigan, Minnesota, Missouri, Ohio, Wisconsin, Indiana, Illinois, Iowa, Arkansas, Kentucky, Alabama, Tennessee and Louisiana.  Lacking in steep mountains or ridges that might block flight paths, the region is well timbered and watered and offers ideal conditions for large numbers of ducks, geese and migrating shorebirds.  One species you may spot in The Mississippi Flyway is the blue-winged teal.  These ducks, generally the first ducks south in the fall and the last ones north in the spring, “migrate from the northern prairies of central North America to areas in Florida, Mexico, the Caribbean, and even to the south end of South America,” Yaich said.  He also notes that one trait that stands out about The Mississippi Flyway is that more waterfowl are harvested in this area than in any other, with the duck harvest at 6,883,000, and the geese harvest at 1,196,000. As well, active waterfowl hunters in this area reached a total of 445,000 in 2013.

More than one million square miles across, The Central Flyway spans from the Great Plains to the Gulf of Mexico, continuing down the Gulf Coast to Central America, and includes North Dakota, South Dakota, Texas, Oklahoma, Kansas, and Nebraska as well as portions of Montana, Wyoming, Colorado and New Mexico, east of the Continental Divide.  Yaich shares that the majority of migrating birds that use this massive flyway make direct north and south journeys, from breeding grounds in the North to winter quarters in the South.  “But complicating this scenario,” he says, “is the fact that the Central route shares some states with The Pacific Flyway, due to borders that follow the Continental Divide.  So it’s not always easy to pinpoint or to classify which flyway was used.”  On the western boundary of The Central Flyway at the northern end of Great Salt Lake, Utah, is a key breeding area for waterfowl.  As well, good sources of food, water, and cover exist over the entire span.  In 2013, active waterfowl hunters in The Central Flyway reached over 200,000, with a total of 2,762,000 ducks and 1,028,000 geese harvested.

Featuring the most varied waterfowl habitats, from Arctic tundra and northwestern rainforest to tropical beaches and mangroves, The Pacific Flyway extends from the Arctic Circle down the Pacific Coast to Central America, covering 12 states and five Canadian provinces and territories.  This flyway includes Alaska, Washington, California, Idaho, Nevada, Oregon, Utah, and Arizona as well as portions of Colorado, Montana, New Mexico and Wyoming, west of the Continental Divide.  Most of the waterfowl that use this westernmost flyway come from Alaska, the Mackenzie Valley, and other interior areas.  Figures from 2013 show 143,000 active waterfowl hunters for The Pacific Flyway, with the total duck harvest at 2,381,000, and the total goose harvest at 413,000.