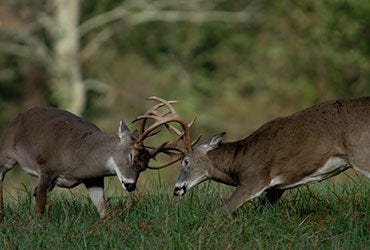 The first thing to learn about big whitetail bucks during the rut is that there are no hard and fast rules. Bucks that felt the pressure of archery hunters likely have changed their routines or become more nocturnal. Regardless, as the rut peaks big whitetail bucks become unpredictable as their focus moves from food to does.

There are so many factors involved with pinpointing the peak of the rut that it’s nearly impossible to predict, although years of experience hunting a certain area will help. Many hunters will drive themselves crazy trying to predict it. They’ll consider their location, buck-to-doe ratio, fawning dates, weather, moon phases, photoperiod and a bunch more factors and make their assumptions. Often the dates they come up with are within the two-week period that is historically considered as the peak of the rut for their area, so all of that hair-pulling may be for naught. Take this example from well-known turkey and deer hunter and Knight & Hale Ultimate Team member Steve Stoltz:

“First, I try to count the number of days following the second full moon after the autumn equinox. Usually the peak will occur about eight to 10 days later. For example, here in the Midwest, that full moon will be on Oct. 26. I predict the peak will hit on or about Nov. 7 or 8.”

Many deer hunting pros consider the late pre-rut, just prior to the “lock-down” phase when breeding occurs, to be the best time to tag a big buck. It’s when big bucks are the most mobile as they search out and dog does nearing estrous.

“Using the above information as a guideline,” Stoltz said, “I then rely on observed movement and talking to other hunters that I know are also hunting the area. In other words, if you’ve been seeing good big buck movement (notice I said ‘big’ buck) and they are traveling without doe, they are still roaming. But then the next day you see a big buck in the company of a doe, it’s time to change stand locations to your rut stands.” This is the time to change your location from hunting a buck’s home range – rublines, scrapes, etc. – to high-travel areas and concentrations of does. In short, smart hunters abandon hunting a specific buck and opt for hunting areas that force deer to travel a certain area. The following are three locations you should look to when selecting a good rut stand.

Funnels are pinched-down areas that force deer to travel a certain path. Funnels can be a narrow treeline connecting two bigger blocks of timber, a treeline bordering an agriculture field and a big bluff or other vertical terrain feature, the head of a ravine or a saddle in mountainous regions.

Smaller plots of timber in agricultural areas are perfect for bucks to hole up with a doe. These areas often are “too small” to hold a buck and can be ignored by hunters. Sneak in quietly to a stand early in the morning or do a mini-drive through them.

During the rut, the bucks follow the does, so whether it’s corn or another agriculture crop, they’ll be at the food source, and one of the best spots to place a stand is at the corner where you can watch both the edge of the field and inside the timber. Cruising bucks will often travel just inside the treeline checking the field for does.

Regardless of where you hunt, always have your calls ready during the late pre-rut and peak of the rut. Bucks are more responsive to rattling and calling during this time than any other time during the season.