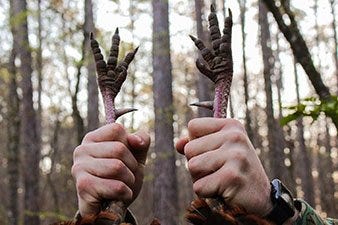 Fall turkey hunting is not as popular as spring hunting, but I think that this due more from a lack of awareness than a lack of enjoyment in the sport itself. Realistically, while the hunting style is different, it is every bit as exciting – and can be a unique opportunity to really learn about the birds, and gain a better understanding of why they do what they do.

Not every state has a fall season, but those that do tend to be more liberal with their regulations and harvest laws. For examples, many states that limit spring hunting to the mornings, allow all day hunting in the fall. This not only opens up opportunities to hunt after work, but can also be a driver to introduce new people to the sport. That friend, spouse, son, or daughter who has continuously declined your sunrise invitation to sit in the turkey woods might be more willing to willing to join you for an afternoon or evening hunt. Additionally, many state allow you to harvest hens as well as gobblers, so the opportunity for a kill is significantly increased for beginners looking for their first kill

Turkeys are not sexually driven in the fall, so their behavior most often revolves around food sources. During years with good mast it can be difficult to pinpoint flocks since they can roam around and feed just about anywhere they want. The good news is that flocks will roost around the same area every night as long as the food source is consistent. Birds will make their daily rounds and wind up close to if not in the same area, so even in bountiful years you can pattern their movements. Turkeys are much quieter in the fall, being most vocal in the AM but soon go silent with only the occasional yelp or whistle - So scouting is the key to finding bird in the fall, and a little shoe leather is going to needed to find them. Try to focus on consistent food sources like green fields or large areas of mast bearing hardwoods, and tall trees next to open areas that would be ideal for roosting. Spreading out game cameras wide across your property, focusing on major roads, can give you a good sense of where they begin and end their days – making them much easier to find.

Once you locate a flock, there are a number of tactics you can use to get close enough for a shot. If you find them feeding, be it in the woods or in a field, try to figure out their next stop and get ahead of them. Remember that Individual birds will roam, so watch them long enough to get a get a good idea of the direction, then think through what roads or fields they could be working towards. Once I am set up, I like to use gobbler yelps and clucks to move them closer my way. Sometimes I will throw in a jake whistle or some raspy broken yelps.

Hens with juvenile flocks a far much easier to hunt and will teach you a lot about calling and vocalization. My favorite way to hunt these young flocks is to sneak in as close as possible and then run into the flock scattering them in different directions. If you don’t scatter at least two or three birds away from the others they tend to regroup fast and will not come to calling. However, if you can push a few birds totally away from the flock those birds will start calling in ten to twenty minutes to locate the rest of the flock. With their natural desire to get back together in their family unit in the fall which makes this method of hunting them deadly. I like to start with some light whistles or KEE KEEs, then pick up the urgency by adding some yelping in with these lost calls. The young birds will hopefully respond and come your way looking to regroup with the flock. Be aware that if the adult hen or hens in the flock start assembly yelping they can pull the other birds away from you. When this happen you will probably need to relocate and scatter them a second time. One of the best tricks is to catch them on their way to roost in the evening and scatter them out after dark. With the whole flock roosting away from each other the next morning will be a calling fest along with many opportunities to call and work birds.

Hens with juvenile flocks are far easier to hunt and will teach you a lot about calling since they will me much more vocal, especially in the morning or after you break them up. With lots of whistling from young birds, yelping and old hen yelps, This can be a great learning lesson for proper rhythm and tone in your calling.

Gobblers tend to be a much greater challenge in the fall.  You can bust them up like young birds and call them back, but they are not always concerned about regrouping quickly.  I have seen bachelor groups that spent a week or more separated before finally regrouping.  If I can locate where the gobblers are roosting, I will usually try to get in before daylight the next morning and set up within 60 to 75 yards. Just prior to flying down I will give them a few gobbler clucks to let them know a buddy is on the ground and normally they will fly down toward the set up and drift in for a look.

My preferred method of fall hunting is to run and gun so that I can cover a lot of ground and hopefully find multiple flocks to hunt. I do call when moving as often times you will have a flock answer and they will just come in to see what the calling is about. Staying mobile is the key to fall turkey success. I like to use a triple reed mouth call for fall calling, typically Knight and Hale’s The Preacher since you can mimic the yelp, assembly yelp, and cluck, for both gobbler and hens. I use a straight double reed call such as the Old Reliable for whistling and kee kee’s of young birds. I also like the small Big Mama slate for kee kee’s on a slate call along with light yelping and clucking and purring.

So, if your state or county allows you to hunt turkeys, I highly recommend that you give it a try. If nothing else, it will help you better understand the birds, and ultimately make you a better spring hunter as well.