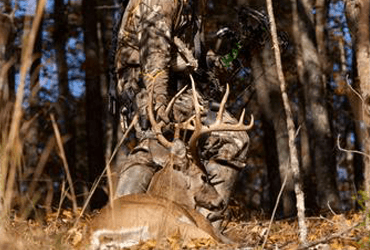 Whether you’re a veteran buck hunter or a newbie heading to the woods for the first time, the tips below can help you see more success this season.

Tip 2
Most hunters think that doe estrous is the be-all and end-all of big buck attraction.  Though estrous is a wonderful tool, it’s simply that.  Wise hunters know that during the early-season it’s important to take advantage of a buck’s territorial instincts. The scent of an estrous doe during early October simply doesn’t make sense to a buck, but buck scent is always worth checking out.

Tip 3
During the peak-rut, try a drag rag soaked in doe estrous. Often a buck will follow the trail right to your stand.

Tip 5
When muzzleloader hunting in wet weather, a piece of electrical tape over the end of the barrel will keep out moisture. You simply shoot through the tape when it’s time to harvest that buck.

Tip 6
One of the deadliest scent set-ups defies the accepted rule of playing the wind. Locate a long strip of timber or cover with the wind blowing along the length of it (blowing from one end to the other). At the windy end, pour some deer scent at several areas, then set up high in a tree stand just on the edge of the timber. If you’re set up high enough, your human odor should flow above the deer.

Tip 7
Practice setting up and taking down your tree stand before the season, and do so low on the tree.  Getting into and out of your spot as quietly as possible is key to having a look at a good buck.

Tip 9
Avoid trimming shooting lanes and otherwise disturbing your hunting area during the season. The time to clear shooting lanes is during summer.  Wise old bucks can become conditioned to the smell of freshly cut timber, and begin to associate it with human predation.

Tip 10
If some concealment is good, then maximum concealment is better.  Tree stand blinds help to fool the wary eye of a deer, and provide the added benefit of shelter from harsh winds.

Tip 11
You’ve got a buck on adjacent land patterned, but it doesn’t cross over to your hunting area until after shooting time is over. What to do? Try tempting the buck to come over to your side with a deer decoy or by calling.

Tip 12
Be sure to douse yourself with tick repellant when scouting during summer and early fall. Tick-borne diseases can shut down your hunting season, and you don’t want it to be over before it’s begun!

Tip 13
Don’t underestimate the importance of being able to get to your tree stand undetected, and don’t think that going in under the cover of darkness will help. Make sure to use a creek or curtain of forest to cover your entry.

Tip 14
Wash all hunting clothes in a non-scented detergent each time you’re heading to the woods. Keep them in a plastic bag until arriving at your hunting area.

Tip 15
Try making a mock scrape. First, put on surgical gloves to prevent human odor contamination. Using a stick, scuff the leaves off of an area about the size of a hubcap.

Tip 16
During the late season, scout for reopened scrapes in deep cover. Surviving bucks are reluctant to get in the open country, but still look for the last hot does in cover.

Tip 17
When there’s snow on the ground, look for leaves strewn across an area where deer have pawed for mast. If there’s still some mast around, that might be a good spot to set up and wait for the deer’s return.

Tip 19
You’ve taken the shot, now what? If you find brown hair and pink or red blood with bubbles in it, most likely you got a heart or lung hit. Brown hair and thick, dark-red blood indicates a hit too far back, possibly a liver shot. White hair and watery blood with stomach matter indicate a bad hit.

Tip 20
Most falls from the tree stand happen while climbing into or out of the stand. That’s why it’s important to always wear a full-body safety harness when hunting from a tree stand.