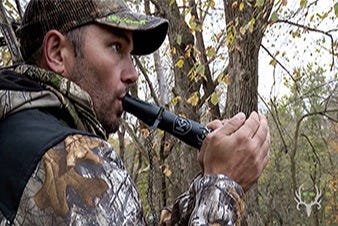 We’re still several weeks away from cooler temperatures and the much anticipated rut, but choosing to leave your deer calls at home during the early-season is a major mistake that can dramatically decrease your shot opportunities. Whitetails are vocal throughout the entire year and the pre-rut period is no exception. With that being said, here are three high-impact calling tactics that you can use right now to coax a massive-racked shooter into close range.

During the early weeks of season, some hunters may actually see bachelor groups of bucks traveling and feeding together. In other regions, hunters are targeting bucks that are already separated and on their own. Regardless of which scenario you encounter during the early pre-rut, it’s extremely important to note that bucks will respond to social grunts. This single note, non-threatening call is absolutely lethal during the early segments of season, because it exploits a mature buck’s natural curiosity.

For most of the summer months, the majority of bucks have been living together in close-knit bachelor groups. As a result, they have become familiar with each member of the group and other deer that reside within their home ranges. This is exactly why bucks will come in closer to investigate the situation upon hearing a social grunt. They simply want to know who the new buck is and what he’s doing there.

If you see a bachelor group or single buck that’s out-of-range, produce a soft and nonaggressive grunt. Once you have a potential shooter’s attention, stop calling and let him begin to work his way toward your position. Always avoid calling back to a buck that suddenly stops and begins looking for the source of the social grunt he just heard. Instead, wait until he is moving again with his head down before calling a second or third time. The trick is to keep the buck coming in your direction without letting him pinpoint your exact location.

After bucks shed their velvet, it’s not uncommon for them to engage in nonviolent sparring matches. This is simply an attempt for them to size each other up and practice for more serious confrontations that may unfold later in the season. Plus, these spirited pushing matches strengthen neck muscles, help establish a pecking order and build confidence. In most cases, two bucks of similar size and age-class will challenge each other. The majority of these early-season sparring matches are very brief in nature, but may occur several times off and on once they’ve started.

Utilizing a rattling call to simulate the sounds of a light sparring match can be very productive during the early-season. Once again, you’re attacking a buck’s natural sense of curiosity with this calling technique. It’s important to remember not to get overly aggressive with the rattling. You’re basically just tickling the tines with some light clashing sounds. In order to sound naturally authentic, these rattling sequences should only last about 10 to 15 seconds.

If you’re hunting open areas, it’s not a bad idea to add a buck decoy to your setup when rattling. Veteran bucks that have survived a few seasons will often want to make a visual confirmation before committing. Setups that are strategically tucked back in the timber or surrounded by adequate cover can be your best option, because you’ll have far less hang-ups. You basically want to force the buck to come in close and search for the source of all the commotion.

Make no mistake; this call is an absolute game-changer under the right conditions. The snort-wheeze is an aggressive whitetail buck vocalization that’s usually used by hunters just before and during the rut. However, the snort-wheeze can be highly-effective throughout the pre-rut and post-rut periods. It communicates sheer agitation and deep anger among dominant bucks that have a chip on their shoulders. A snort-wheeze is used to warn another buck that he better tuck his tail between his legs and leave immediately. It’s also a challenge-type call that seems questions another buck’s manhood or dominance, because the response it often provokes is sometimes scary.

Even in the early weeks of the season as bucks are in bachelor groups, they can still be uneasy about being the first to enter a field. Deer get dust in their noses when they feed in your green fields, causing them to sneeze. A sneeze wheeze is a natural sneezing sound that is calming and comforting to the deer.

The snort-wheeze call is a proven shot-generator when nothing else works. Some bucks just like people have a bad attitude and very short temper. If you call them out, they’re not going to back down an inch or turn the other cheek. A snort-wheeze is capable of making a buck stop on a dime, turn completely around, and march stiff-legged straight to your setup. This call doesn’t work every time, but it can quickly stack the cards back in your favor during tough hunting situations.

Consequently, you’ll want to use this call when bucks are too far away to shoot and won’t respond to a social grunt or light rattling. Two short intense breaths followed by one long drawn out breath is all it takes to close the deal.

Posted in Calling Tips By @Knight&Hale