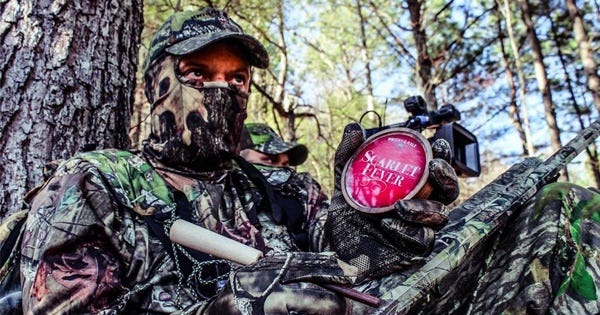 "Crank Up The Heat" With Travis Faulkner

This past April, I found myself on the top bench of a mountain trying to fill my last turkey tag. Other than opening weekend, the hunting conditions had been extremely tough. A combination of high-winds, thunderstorms, and hen-pecked gobblers made it seem almost impossible to close the deal. In addition, having to clock in at work during the week was also really cutting into my hunting schedule.

On the morning of the hunt, I had been up and down just about every mountainside in the county without even hearing a single courtesy gobble. Finally, I spotted a nice longbeard in full-strut behind several hens working their way down the mouth of a deep basin. Immediately, I circled around and dropped behind the opposite ridge in an attempt to cut the birds off. Once at the bottom, I quickly setup just below the lip of a long wooded ridge that met the creek-bottom.

At this point, I could actually hear the hens scratching in the leaves and the longbeard drumming on the other side of the ridge, but unfortunately they were headed in the opposite direction. I hit the group with a few soft clucks followed by some muffled yelps on my Scarlet Fever Friction Call, which was exactly what the doctor ordered. This call gives you the ability to generate those subtle and sweet vocalizations that drive gobblers crazy. Plus, it also has the ability to reach out and touch birds at long distance with excellent range and volume.

An echoing gobble instantly erupted, which made my heart skip a few beats. All at once, I saw the gobbler’s chestnut brown tail-fan stretch out just above the crest of the ridge. This old boy was henned-up, but apparently he didn’t mind picking up another hot date.

Without hesitation, I locked the faint glowing bead of my shotgun directly on the longbeard’s brightly colored head. A gentle squeeze of the trigger dropped the henpecked gobbler right in its tracks causing the hens to scatter like a giant covey of quail in all directions. In my opinion, pushing the envelope by moving and setting up dangerously close to these turkeys allowed me to tag a tough longbeard that was practically untouchable at the time.

Over the years, I have utilized the terrain and my surroundings to block my movement and setup extremely tight on henned-up gobblers. This technique is definitely risky and you may bust some birds from time to time, but at least this strategy gives you a fighting chance to create a shot opportunity. The worst-case scenario results in you breaking up the flock, which will allow you to go to work on the gobbler without being hassled by a bunch of pesky hens.

Posted in Hunting Tactics By KH