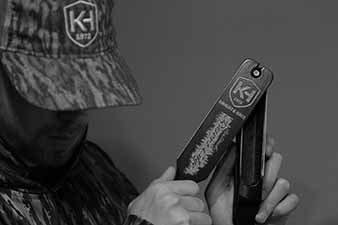 We can all agree that two is better than one. Well, those turkeys you’re chasing think so too.

Box calls are a staple in anyone’s turkey call arsenal, not only for its loud realistic tones that help locate turkeys in the distance or on a windy day, but also for its ability to manipulate the sound of a handful of different hens all with one call.

Box calls were one of the first style of turkey calls on the market, patented in 1897 by Henry Gibson. The box call originally was a piece of carved out wood and a striking blade, known as a scratch box today, and eventually evolved into a carved out box with a lid and screw.

Some of the more well-known Knight & Hale box calls over the years have been the Bloodwood Cutter, Sweet Little Liar, the Long Spur, Mini Jenny, Ol’ Yelper and Tirade.

More recently, the top-selling Knight & Hale box calls are the Switchblade, Wet Willy and the newest in the line, the Razor’s Edge. Designed by Bone Collector’s Michael Waddell, the Razor’s Edge utilizes an aluminum striking surface onto a traditional box design.

Manipulating different sounds with a box call, like clucking, cutting, cackling and purring, are fairly simple with a little practice.

How to kee-kee with a box call:

How to cut with a box call:

How to cluck with a box call:

How to yelp with a box call:

How to create different sounds by swapping lids:

How to change tones with a box call:

How to cackling using a box call:

How to use the Razor's Edge: