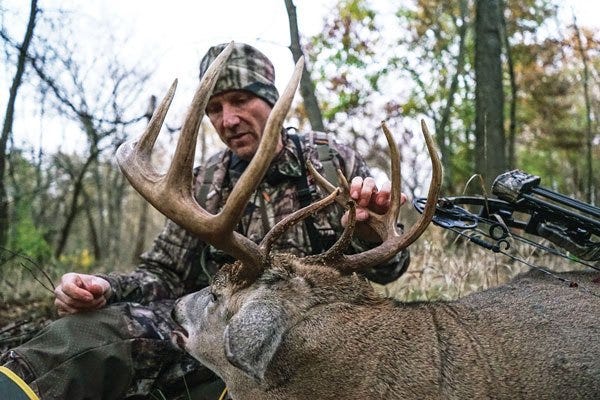 “On one hand, trail cameras are among the best tools for locating and tracking mature bucks. But if improperly used, they actually can help keep a buck alive to reach the next age class.

“While I do use cameras, I use them sparingly and with tons of patience. I hunt mostly public land, which presents two challenges. First, you run a risk of having cameras stolen. Secondly, on many public lands it isn’t legal to use an attractant to get deer in front of a camera.

“If I’m not able to use any mineral or food for bait, in the summer I’ll often hang cameras around water holes or river crossings, as well as in heavily used areas going into or out of food sources. I tend to mount my cameras 7-8 feet off the ground, tilting them downward. This usually will keep those with sticky hands from walking off with your goods.

“I like to find places that lead from known buck bedding areas, as this increases the chances of getting images of what I’m looking for. While hunting private land on which attractants can be used, I just add corn or mineral to help ensure a stopover in front of the camera.

“I force myself to give the cameras at least three weeks before checking in the early season. This is generally an inventory check, as we all know many things change even in early September. However, this should give you a pretty good indication of where your efforts should start in early season.”

Chris’s tips for using game cameras in the late season are located in the full article (What’s the Best Method for Using Trail Cameras to Pattern Trophy Bucks) on www.northamericanwhitetail.com.