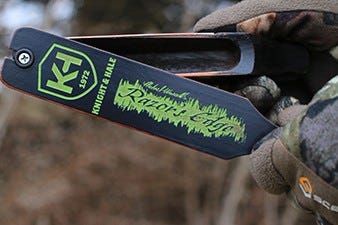 Ask a group of turkey hunters to name their favorite type of call, and you’ll likely get a bunch of different answers. But the one thing they will all probably agree on is that the box call is the easiest of all turkey calls to master. The learning curve for a box call is much shorter than a diaphragm call or even a pot call. For that reason alone box calls are a natural choice for the beginning turkey hunter. With a little practice a novice can pretty quickly learn the techniques that will bring out the versatility of this type of friction call. Cuts, clucks, and yelps are all within the capabilities of a new hunter and their box call.

Adding to the icon.

Although it's often seen as an ideal first call, a box call is a simple to use option that a hunter can rely on for years to come. The simple process of rubbing the bottom of the paddle against the lip of the hollow box produces a volume level unmatched by other types of calls. So there are good reasons why the box call remains so popular. But what if it could be made even more versatile? That was something Michael Waddell of Bone Collector™ had been considering.  Specifically, he was wanting a more raspy sound quality from a box call.

The makers of box calls have been playing with its sound quality since the first ones were created in the 19th century. Usually that involved experimenting with different types of wood.  What Michael envisioned, however, was a sound quality that would go well beyond the differences wood offered. It was the type of challenge Knight & Hale engineers live for, and our recent partnership with Bone Collector provided the opportunity.

The sound of success.

After prototyping and testing the engineers and Michael arrived at the ideal material--aluminum.  When combined with a mahogany paddle, the aluminum edge along one side of the box created the extreme rasp Michael had hoped for. The combination also resulted in some unique cut and yelp capabilities. Once they had the design and production nailed down, the call was appropriately given the name Razor’s Edge for its laser cut metal addition and the outstanding cuts it produces. But its full name, Michael Waddell’s Razor’s Edge, better describes the pride behind its creation. To add to its versatility, the engineers made sure the turkey call also accepted the patented Knight & Hale Quick Release System found in with the Switchblade box call.

The box call is rich in American heritage, equally cherished by new and experienced hunters alike. There is no place where turkey live that it hasn’t brought home a trophy. But the Razor’s Edge takes the legend to all-new territory.

Posted in KnH News By @Knightandhale